At the end of December 2019, together with my friend Ilaria I spent two days in the beautiful Assisi. It was very restful immersing ourselves in the landscape surrounded by a magic blue light, as if in this place, which is above all a place of devotion to Saint Francis, the sky was really closer to the earth.
We visited the Eremo delle carceri, walking along the distance between it and Assisi, and some of the many churches, including the unmissable Basilica of San Francesco (which contains many beautiful frescoes), Santa Maria Sopra Minerva (I was impressed to learn that it has been a sacred place of meeting between humanity and the divine for over 2000 years), San Rufino, Santa Chiara.
Not only in the churches, but also in the streets of this little town that is wonderfully well preserved, one breathes an unusual atmosphere, as if in the depths of each one the desire to communicate with the invisible world, to look inside yourself is prevailing.
A unique place, to which I'm already looking forward to going back. 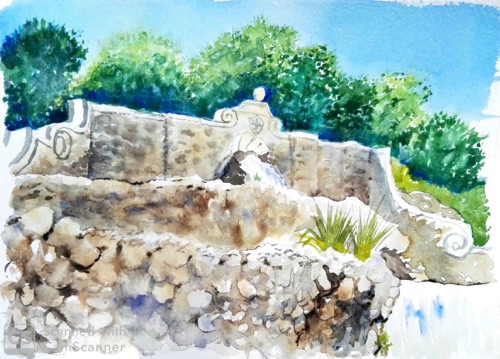 Here they are, the beautiful Poggi Ramps, built during the years when Firenze was the capital of Italy, restored to their original splendor, with the water flowing rustling from one basin to another, making the steep scarp above Piazza Poggi - where there is the tower of St. Niccolò - a fresh and pleasant place.
While I was painting, I was struck when I saw several Florentines arriving by car, getting out to admire the well known and yet new place (after the restoration), and commenting with me with joy and enthusiasm on the beauty of this architecture.
A very rare thing in Florence, where it is easier for anyone to get criticism than praise.
I hope to come back soon. 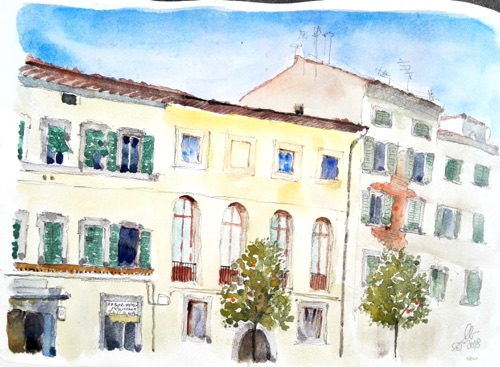 Just a few weeks ago the new Piazza dei Ciompi was inaugurated, renewed after moving to another location the ancient and beloved antique market which for many years was the soul of this place.
Now in the middle of the square there is a quiet enclosed garden, not the same thing but I must say that the square is still a beautiful and pleasant place, the ideal location to spend a whole morning drawing with other Urban Sketchers, some Florentines , others coming from far away, together with the members of the lively Florence Drawing Club, all united by the common interest in location drawing and art.
2 commenti:
Invia tramite emailPostalo sul blogCondividi su TwitterCondividi su FacebookCondividi su Pinterest
Etichette: architecture, Florence, location drawings, Piazza dei Ciompi, sketch, squares, watercolour 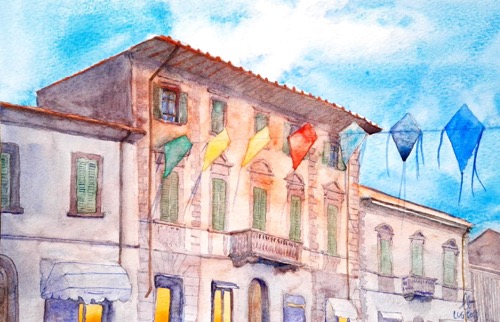 This summer I had the pleasure of taking part to the "Sesto Arte" event, which took place in the center of Sesto Fiorentino, not far from Florence, where together with a number of artists I spent a nice July evening drawing and painting on the street, while the citizens of Sesto could stop and look between one purchase and another, taking advantage of the open shops.
For me it was a nice opportunity to exchange with interesting artists, and also to hear live comments from the passersby on some of my works that I kept exposed on an easel next to me.
And, no less interesting, the evening gave me the opportunity to paint when the sun had set, experiencing the changing of lights at twilight.
(watercolor on Magnani paper, 13"x8,5")
Nessun commento:
Invia tramite emailPostalo sul blogCondividi su TwitterCondividi su FacebookCondividi su Pinterest
Etichette: architecture, location drawings, Sesto Fiorentino, SestoArte, twilight, watercolour 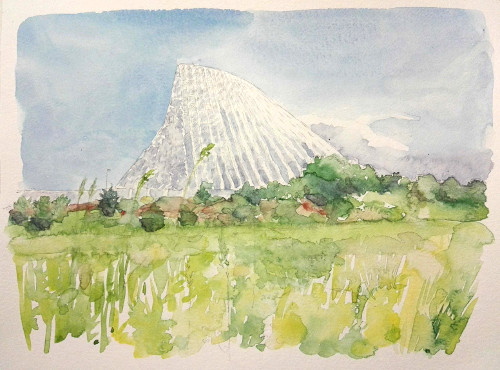 I spent a very pleasant Sunday with the friends of the group "Sketchers Maledetti de' periferia" (here their Facebook page), dedicating the morning to an incredible architecture of the Roman suburbs that unfortunately remained unfinished: the "Vela" (i.e. "Sail") by Santiago Calatrava, a sports facility that was supposed to host the 2009 World Swimming Championships, but which has never been completed.
I was expecting a decaying structure, as might be expected in the case of an abandoned building site for 9 years, and instead I was surprised by the beauty of its shape imposing even at a great distance with a shininess somehow mysterious and even spiritual.It occurred to me that, indeed, a structure like this would have been better suited to a cathedral than a sports center, and perhaps this dissonance between its shape and its intended function has something to do with the reasons for its current state of abandon. I imagined the archaeologists that in thousands of years will study it understanding nothing, finding in this object an insurmountable enigma.
Nessun commento:
Invia tramite emailPostalo sul blogCondividi su TwitterCondividi su FacebookCondividi su Pinterest
Etichette: architecture, friends, location drawings, Roma, Santiago Calatrava, sketch, Vela, watercolour
Post più vecchi Home page
Iscriviti a: Post (Atom)

Lucia B.
Firenze, Italy
Benvenuti! Questo è lo spazio nel quale condivido i miei disegni e acquerelli. Grazie per la vostra visita! ● Welcome! This is the space where I share my drawings and watercolours. Thanks for your visit! If you wish to contact me write at: lb[dot]album[at]yahoo[dot]com

Most popular posts of this month